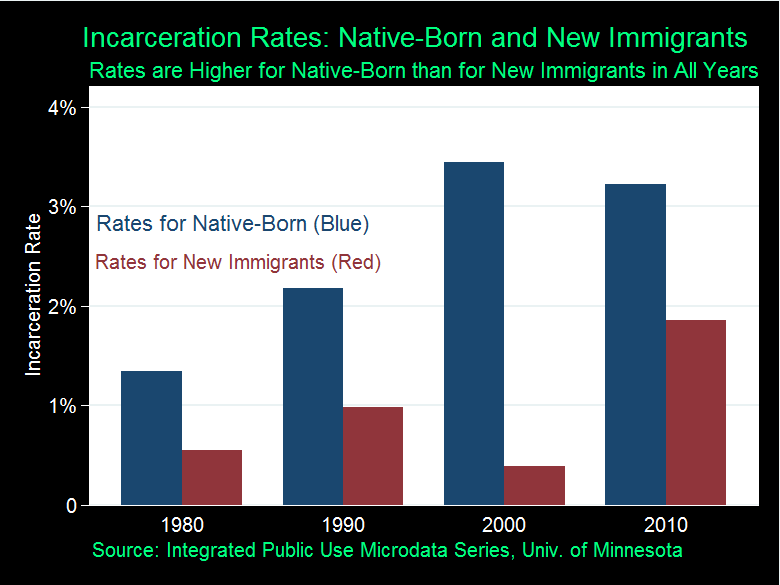 One concern about immigration is whether immigrants are more prone to commit crimes than the native born population. This concern is not unique to the United States; it has affected policy in Europe, as a flood of immigrants has fled turmoil and war in the Middle East. But in the U.S. the issue took center stage during the presidential campaign when candidate Trump claimed that many Mexican immigrants are criminals, drug dealers, and rapists. President Trump has followed up on this position with an executive order calling on the Department of Homeland Security to publish a weekly list of crimes committed by "aliens." And, in recent days, Immigration and Customs Enforcement (ICE) has conducted raids across the country, purportedly targeting immigrants who “pose a threat to public safety.”

There is no empirical evidence that immigration increases crime in the United States.

There is no empirical evidence that immigration increases crime in the United States; indeed, the rate of incarceration of immigrants is consistently lower than that of the native born of similar ages. Policies that enable immigrants access to legal jobs could lead to even lower rates of crime. In Italy, legalization of immigrants – which allowed them to obtain legal employment – reduced their criminal activity. Conversely, United States policies that limited immigrants’ ability to work increased their rate of economically-motivated crime (such as drug offenses). Crime rates can also be affected if local police are tasked with enforcing immigration law since that that takes them away from other investigations and actions and, furthermore, could make immigrants in their community more hesitant to report crime, assist in investigations, and come forward as witnesses. Thus, police officers may find it more difficult to keep their communities safe when they, rather than federal immigration authorities, are required to enforce immigration laws.

Who Will Pay for the Wall?
by Menzie Chinn
Written by The EconoFact Network. To contact with any questions or comments, please email [email protected].
﻿
Stay in the know
Sign up to get the latest memos, alerts on new podcasts, and analyses from top economists straight to your inbox.