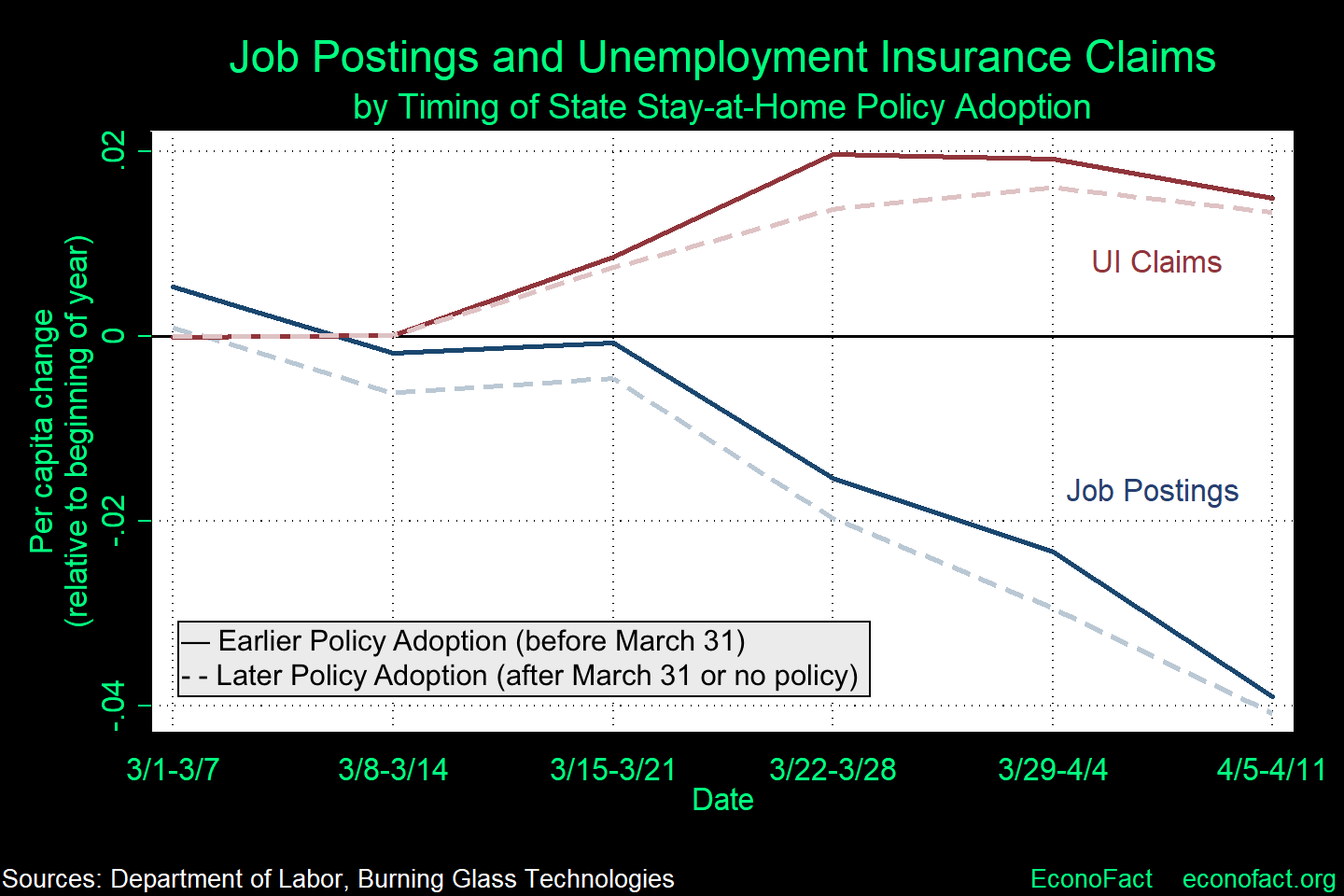 More than 26 million workers have filed for unemployment in a span of five weeks in the United States. The historic and sudden rise in unemployment across the country is without precedent. Looking beneath the headline numbers can provide a clearer view of the fast evolving situation. Initial Unemployment Insurance (UI) claims are one of the few real-time indicators of the state of the labor market, however they provide only a coarse view. The data reflect job matches that have been dissolved in the recent past and most states do not break down the numbers by industry. Thanks to a novel data source of job vacancies posted on the internet, collected on a daily basis, we have a real time measure of employer demand. These postings data are an inherently forward-looking measure, representing new jobs a firm seeks to fill, which can be disaggregated to the detailed industry-, occupation-, geographic location-, and even firm-level. Together UI claims and job vacancy data provide a more detailed account of how the labor market evolved over the last weeks and how it is likely to continue to evolve.

The labor market collapsed at the same time across the U.S. irrespective of the early spread of the virus or the timing of state-level policies imposed.

The labor market is currently experiencing unprecedented weakness. We observe broad-based declines in job postings and spikes in unemployment insurance claims across states, sectors, and occupations. Essential retail and nursing are exceptions in that job postings have not fallen, even while they have seen large spikes in claims. As a result, these areas will see a great deal of churn, with many workers being sent to unemployment even while employers desire to maintain hiring. Work-from-home occupations have been somewhat sheltered from immediate unemployment, exhibiting less than half the rate of increase as non-work-from-home occupations. However, given the large decline in job postings for work-from-home occupations, we expect these areas to show weakness in excess of that indicated by unemployment insurance claims in the coming months. That is, these areas still suffer from the negative aggregate demand shock stemming from the crisis. The broad based nature of the collapse in vacancy postings and spikes in UI claims suggest the current damage is not solely caused by stay-at-home orders; it is too large and pervasive. Just as employers across the nation reduced hiring and began to lay off workers at about the same time — regardless of the specific stay-at-home orders in their state — lifting the stay-at-home orders does not necessarily or automatically change the outlook for demand of products and services. Customers are likely to remain cautious, companies may be reluctant to act too quickly, and interruptions in global or national supply chains are likely to continue while the risks of viral outbreaks remain. We therefore conclude that the damage to the economy is unlikely to be undone simply by lifting stay-at-home orders.

COVID-19 Impacts on Agriculture, Food, and Nutrition
by William Masters
Written by The EconoFact Network. To contact with any questions or comments, please email [email protected].
﻿
Stay in the know
Sign up to get the latest memos, alerts on new podcasts, and analyses from top economists straight to your inbox.