How Do Low-Income Families Spend Their Money?

By Lisa A. Gennetian, Jordan Conwell and Becca Daniels·November 15, 2021
Duke University and University of Texas at Austin 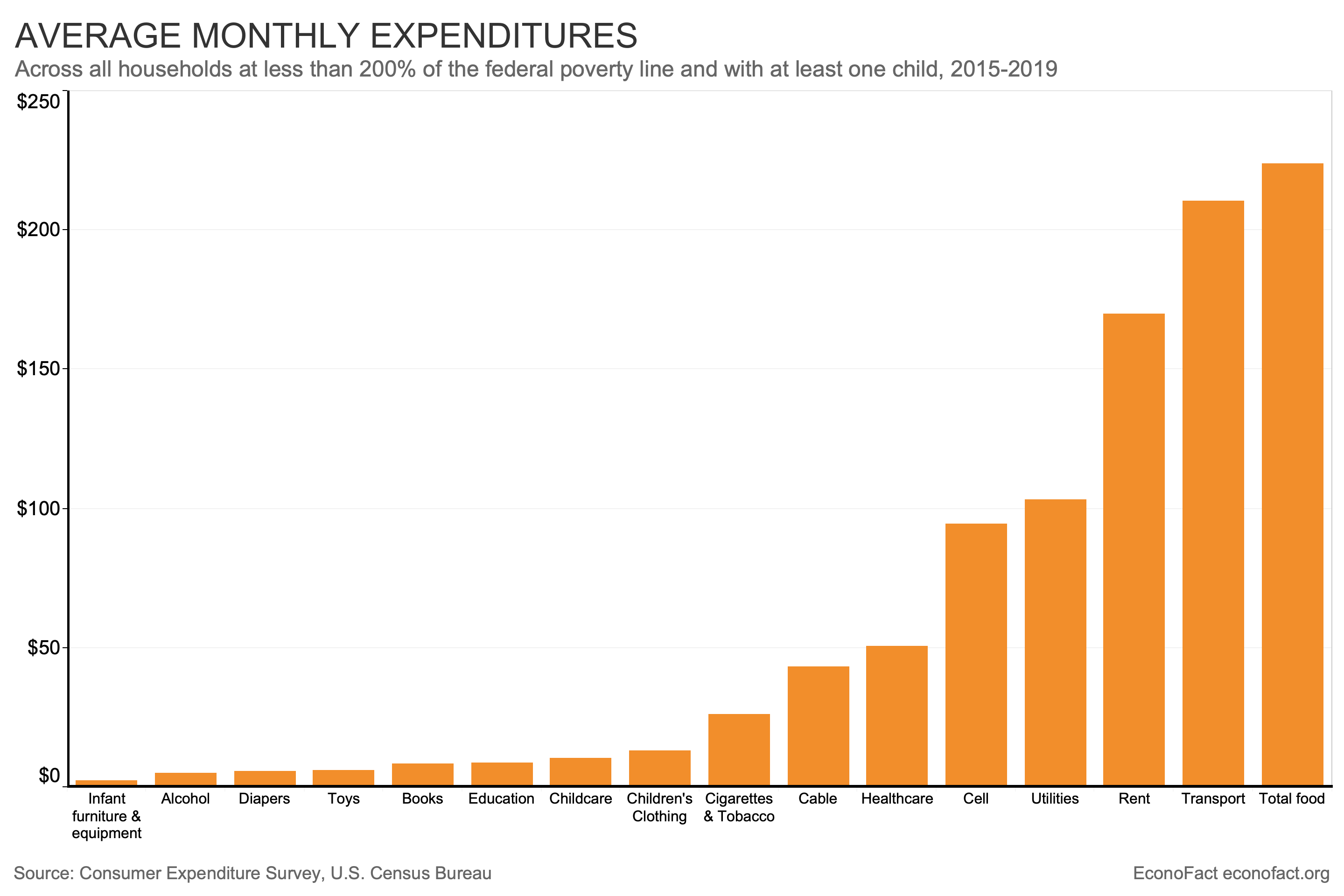 (Click here for a larger version of the graph)

Over 10 million American children —1 in 7— were living in poverty in 2019, as measured by the official U.S. poverty level. The proportion is even higher for children younger than 6 and for Black, Latino, and American Indian children. Many of the programs in the U.S. social safety net are specifically targeted to help families with children residing in poverty meet core needs such as food, housing or health care. Examining the typical expenditures of families with children residing in poverty offers a fuller picture of how they allocate their limited funds and the extent to which government programs are available to cover costs of some of these necessities.

Nearly 75% of expenditures for families living in or near poverty goes to food, transportation, rent, utilities, and cellphone service. (Click here for a larger version of the graph)

Our analysis shows that in spite of the safety net programs that support families residing in poverty, those living at or below twice the federal poverty line, devote a substantial share of their monthly expenditures to goods and services necessary for basic shelter, health, and nutrition. The data do not support claims of ‘irresponsible’ spending on alcohol or tobacco among these families. Even though many public programs now rely on technology to get access, social programs have not caught up to the demands of contemporary daily life. Transportation, utilities, and expenses related to uptake and use of technology are all key expenditures that impact quality of life, parenting, and economic opportunity, yet are not typically covered by government programs or subsidies. The data also suggest evidence of places where public subsidies may fall well short of families’ needs, such as food costs. Families may have access to food through food pantries and informal support through other means we can't observe, and SNAP dollars make up some of the food expenditures in our data. Still, more than two-thirds of families residing in or near poverty report sizable out-of-pocket food expenses and households with children make up the largest share of households experiencing food insecurity in the United States. These facts speak to criticisms of the existing program’s reliance on potentially outdated formulas inadequate to the food needs of a present-day household with children.

What Is Driving the Increase in Food Prices?

What Is Driving the Increase in Food Prices?
by Jayson L. Lusk
Written by The EconoFact Network. To contact with any questions or comments, please email [email protected].
﻿
Stay in the know
Sign up to get the latest memos, alerts on new podcasts, and analyses from top economists straight to your inbox.