By Michael Klein and Maurice Obstfeld·June 9, 2020
The Fletcher School, Tufts University and The University of California, Berkeley 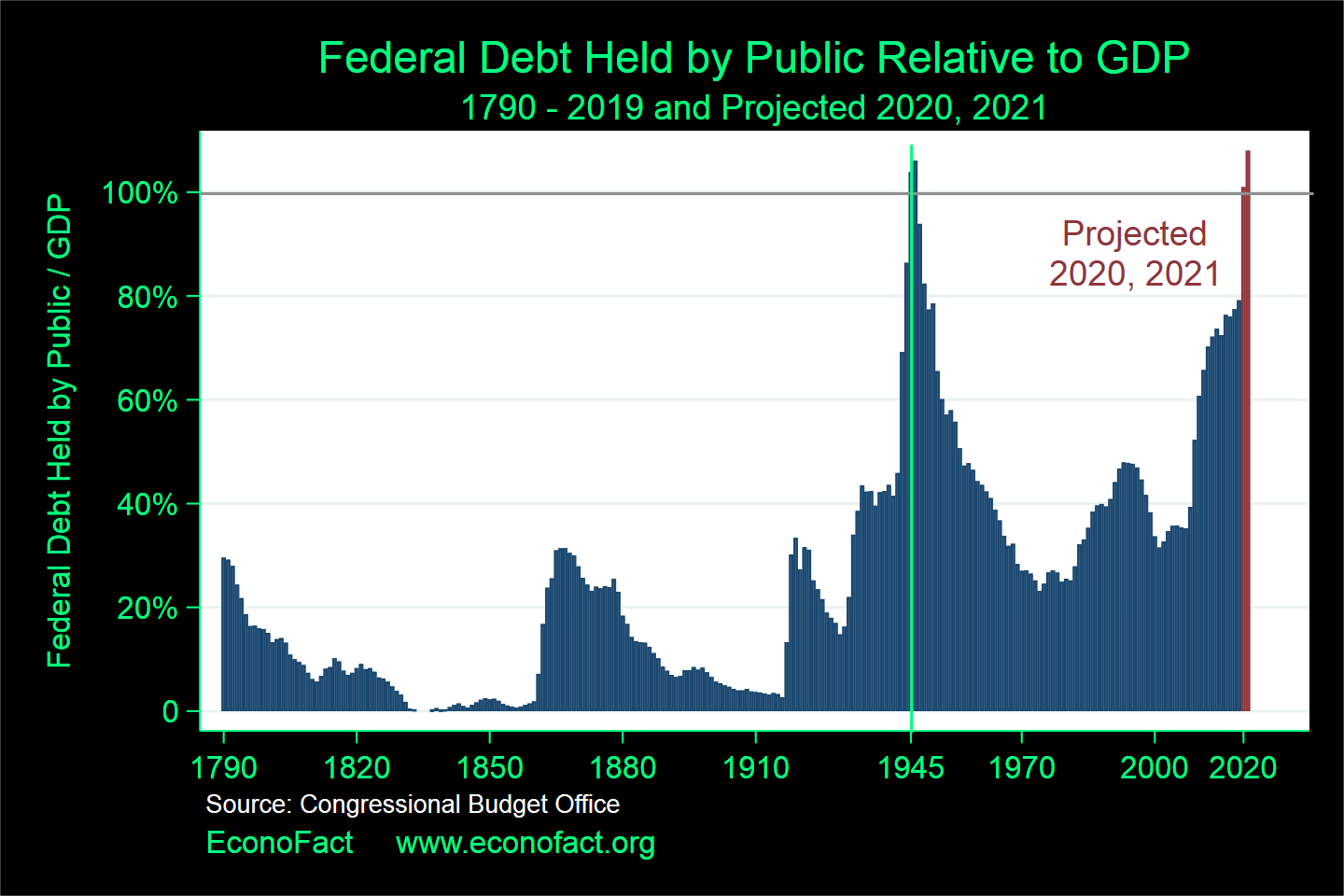 U.S. Federal government debt in the hands of the public amounted to 79 percent of Gross Domestic Product (GDP) at the end of 2019, but it could exceed 100 percent of GDP by the end of this year and rise even higher in 2021 and beyond. Debt levels this high were last seen at the end of World War II, which left the U.S. public debt at 106 percent of GDP. Other advanced economies will similarly exit the current global recession with sharply higher public debts. Will it be important for the United States to reduce its high debt burden rapidly through sharp cuts to government spending or big tax increases?

Low interest rates and a return to economic growth at levels slightly below what was expected before the crisis could make public debt less costly.

The prospect of even a big increase in the ratio of debt to GDP does not imply that the U.S. government should tighten fiscal policy before the economy fully recovers. Moreover, policymakers should recognize the danger that too little support could leave the economy on a lower GDP growth path and facing stronger deflationary pressures. If this is the outcome, then too little fiscal stimulus will ultimately be more costly than too much. Penny wise would be pound (or dollar) foolish. In addition, the Fed should keep interest rates low to guard against deflation and to ease the Treasury’s interest burden, increasing rates only when there is a clear danger of destabilizing expectations of higher inflation. Indeed, some amount of inflation above the Fed’s 2 percent target (which the Fed has consistently undershot over the past decade) would help reduce the burden of debt. Given projected growth in nominal GDP, we will not see the debt-GDP ratio fall as rapidly as it did in the three decades after World War II. But once the current recession is past, the United States may nonetheless be able to place debt on a declining path without a rapid transition to primary budget surpluses.

Coronavirus / Debt and Deficits
Read next

Housing Markets and the COVID-19 Crisis
by Jeffrey Zabel
Written by The EconoFact Network. To contact with any questions or comments, please email [email protected].
﻿
Stay in the know
Sign up to get the latest memos, alerts on new podcasts, and analyses from top economists straight to your inbox.